This is a great little guitar. It’s essentially Squire stratocaster with a San rio license.

The body is basswood and the neck is maple. It’s got a single humbucker and volume control. 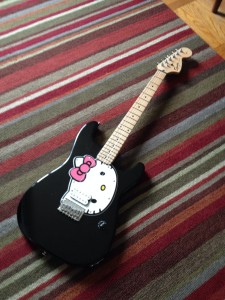 I got this on Craigslist for $50. Not a bad deal. I think it was actually a very good deal. Everything worked but the guitar did not play so great. You can’t even buy all of the parts for $50, at that price you have to expect to put something in yourself. 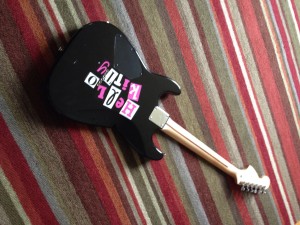 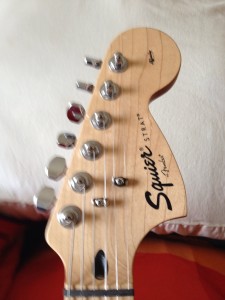 I took the neck off and gave it a fret level. One of the frets was sticking up. So I glued that down with a little super glue. 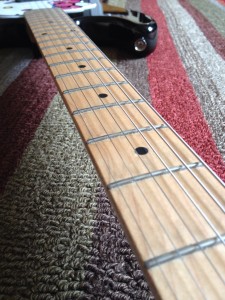 This was the first time I had leveled frets. So the $50 guitar was a good place to start. I got the neck as flat as I could get it. Taped up the fret board. I used Shapie to color the frets. Then ran the leveling beam across the frets. I sanded the frets down until I could see some ink being removed from all of them.

Then I made a new nut. This was also a first time. I started with a plastic blank. It had some grooves but, these needed to be deepened and the rest of the nut needed to be shaped. 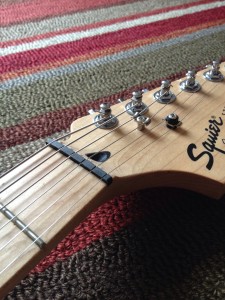 This turned out well after some trial and error. At one point the nut seemed to be adjusted well but, the high e string exhibited a sitar like ring. In the end I fixed this by lowering the string tree to increase the break angle of the e and b string over the nut.

After the fret level I could lower the action considerably. The guitar was playing pretty good. At this point the height adjustment screws in bridge sadle of the low e string were sticking out and digging into my palm. I took them out and cut two threads off the bottom of each with some big wire cutters. 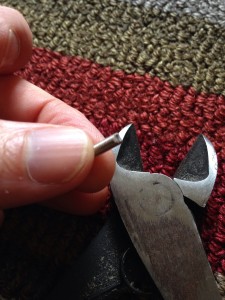 The I filed the ends smooth. I could have cut another one or two threads off as about one thread was still sticking out the top. But it didn’t bother me so I decided to leave well enough alone. 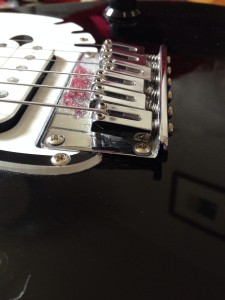 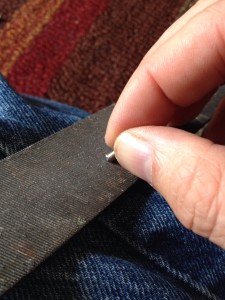 Last I adjusted the bridge height and set the intonation.