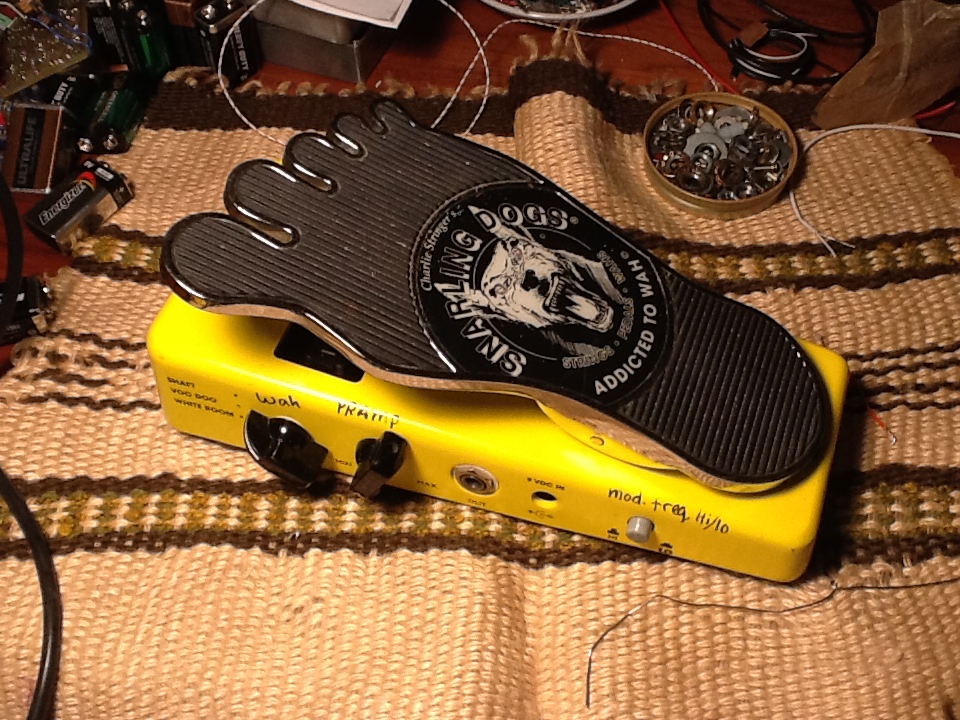 Sounds like something from an old Bugs Bunny cartoon. Though it might have appeared in a Warner Bros. production it could have easily added to a sound track. Looks like it should be on the floor of your custom van, the one with custom paint and interior.

This is the Snarling Dogs Mold Spore Psycho-Scumatic wah. We’ll call it the Mold Spore from here on out. It is a combination wah and ring modulator. Yep, you read that right, wah plus ring modulation.

For those of you who are not familiar with ring modulation a short description is in order.

Ring modulation, also known as balanced modulation, is a process that combines two signals using a mathematical function. The two signals are the input, your instrument, and the carrier frequency. The carrier frequency, in the case of the Mold spore wah, is an audio frequency generated inside the device. The mathematical function is the sum and the difference.

For example, imagine you played the note A 440hz and the internal carrier frequency is 600hz. Feed these both into the ring modulation circuit and it outputs:

Generally speaking, this produces a non-musical tonal relationships. The classic sample of ring modulation you may be familiar with is the voice of the Daleks on Dr. Who.

The Mold Spore wah, not only provides typical wah sounds, it also provides ring modulation sounds and it allows you to control the carrier frequency with the treadle. You can actually have the wah and ring going at the same time and control both with the treadle, neat!

There are two push button switches:

The enclosure and general structure is pretty well made, very solid. The whole package is heavy and feels very solid.

Inside the wiring and soldering leaves a little to be desired. I’ve had the thing for some years and it still works, but have had to repair it a few times.

Recently, I broke it out for fun, and the ring mod was not working. After opening the box I noticed one of the chips had a hole, which looked to be burned from the inside out.

The chip was a MAX1044, this is a charge pump. The ring mod section probably requires +9V and -9V. The charge pump generates -9V from the regular +9V supply. This allows the mold spore to run off a standard +9V supply.

These chips also cost $2 to $5 ouch! Luckily I had a few in the parts bin. This particular chip was installed in a socket, where the other chips are soldered to the board, which suggests they had problems with this chip, or at list anticipating trouble. This made it easy to replace.

Anyway, I replaced the MAX1044 and the thing fired up immediately. He ring modulator working in all of its sonic glory. Of course the suspicion of something going wrong was in the back of mind. A quick check did not detect any chips showing any signs of over heating.

The Mold Spore runs off a 9V battery, but the charge probably drains the battery pretty fast. best to run this one from a power supply.

The wah alone is a very usable. The three settings provide a lot of choice, though I find myself using White Room most often.

The boost is a nice added bonus. I wouldn’t use it just for the boost alone.

The ring modulation is not an effect you will find yourself using often if it all. Then again if you’re in the mood to make dissonant noises it could be just the thing you’re looking for.

As explained above the effect is based on a non-musical function. In general this is true. There are times when the ring mod will produce musically interesting tones. Being able to control the carrier frequency with your foot allows you to ”tune” the effect as you play. Admittedly his is not as easy as playing the wah by itself. The addition of treadle control of the carrier adds a significant dimension to the ring modulation effect.

The ring mod can also produce interesting and musical sounds if he carrier is tuned to a pitch that produces musical tones around a tonal center.

These ideas give you two strategies to using the ring mod. Tune the carrier with your foot, or tune the carrier to a note central to a musical phrase or section.

The wah works well with other effects. I get great sounds putting fuzz before the effect. This creates a really synthy sound with a octave down type fuzz. We’re talking MXR Blue Box type effects.

The Mold Spore’s sounds are both capable and unique. The ability to control the carrier frequency with the treadle adds new dimension to the ring modulator.