This worked right after I found a small solder bridge grounding the input cap. The PCB layout I posted has some very small traces that are very close to the ground plane. I thought this was going to be a nightmare to solder. It was actually not too hard. I found careful application of small amounts of solder worked well.

My first impression was wow this is so distorted I’m not even sure that it’s working. After some testing I notice there is a very nice octave that comes out at times. Seems playing single notes around the 12th fret really brings out the octave, go figure. The octave sounds very nice under the right conditions.

Chords throw everything out the window. Playing a chord seems to make the sound explode into a barrage of noise, and not very musical noise at that.

Could be good for something. The mix is useful. Turning it down you can mix the octave to a pleasing level. Turning the mix all the way up produces a random arpeggiated note sort of distortion. This has some potential, but is hard to control. Q4 and 5 form an oscillator that is driven by the input signal. I wonder if  there were a control control the frequency of the oscillator if some more interesting sounds would come out.

The oscillator portion of the circuit stumps me. I don’t understand how this works and have not been able to find anything similar for reference.

I have been thinking about making Joe Davidson’s Shocktave for many years now. I have yet to build it, the PCB in this post is unverified so far. I’m finally getting around to it.

I had built a BSIAB II while back that had all of the transistors in a row. This made for a fun layout. It also made it convenient to use a single 15 peg milmax header as a socket for all the transistors. This worked out well, so I thought I’d try the same idea here. It works out especially nice since all the transistors are the same and face the same way. Hard to put the wrong one in the wrong place or backwards. Not that I would ever do that.

I’m sorry the values are hard to read to in the layout. I’m a beginner with Eagle. If anyone knows how to arrange the values are part names individually please post a comment and let me know. 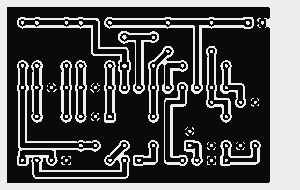 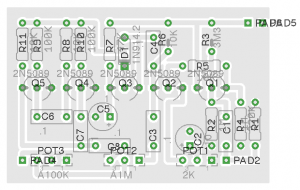