I lost a lot of these pictures from my blog. So i thought I would repost them again for fun. 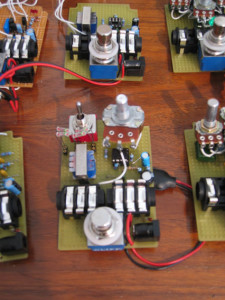 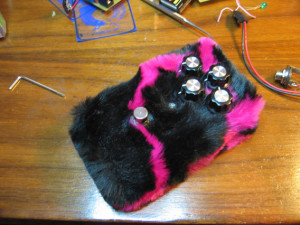 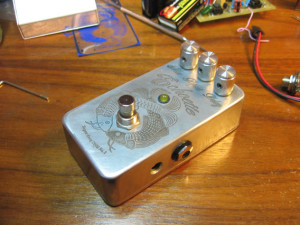 The Ugly Face has an interesting set of options. The Threshold knob has to be the most interesting though least useful. Last year I thought I’d add a tone control in it’s place. I wanted to build an Ugly Face and keep it in 1590B sized box. This format makes it hard to fit more than 4 Knobs. I decided to drop the Threshold and replace it with a Big Muff style tone control.

This was a pretty easy project, I already had a PCB and all of the parts on hand. The PCB I had did not have any space for the tone control. The Big Muff tone control requires, besides the pot, fours parts, two resistors and two capacitors. I remembered seeing an article on the Big Muff tone control over at Beavis Audio research where they mentioned soldering all of the parts on to the pot. I thought about this but decided against it. I have been using and planned to use these 12MM pots. Which seemed too small. Plus the box was going to be a little crowded and didn’t want to risk the parts shorting against something.

I decided to mount the tone control on a tiny piece of perfboard.Using small multilayer ceramic caps would make the whole thing fit easily.

Last was to run the output of the Ugly Face into the tone control before going to the volume.

[Picture the interior of the box]

I decided to do this box in a plush purple fur.

I built an Ugly Face last week and took some pictures. This uses the Ugly face PCB I made and the typical DIY stompbox parts. I used the alpha 12mm pots in a B sized box. The more common 16mm pots would also work. 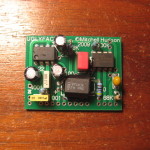 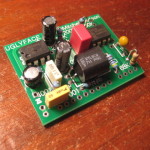 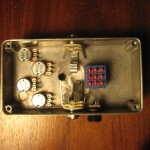 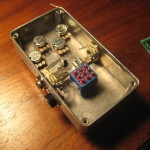 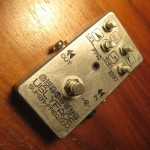 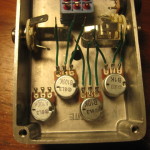 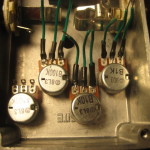 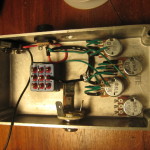 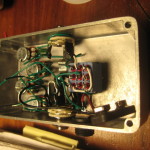 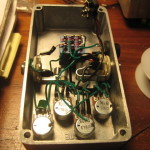 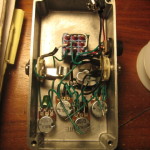 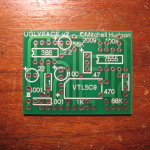 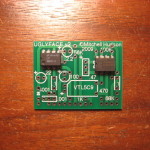 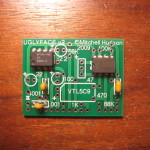 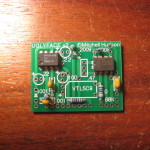 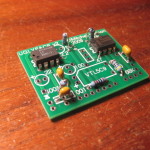 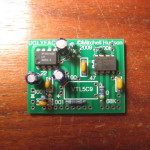 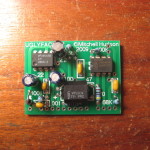 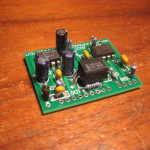 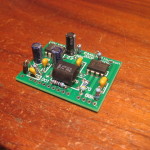 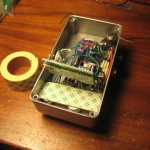 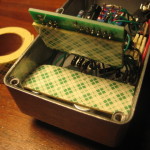 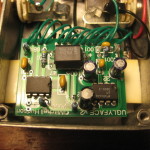 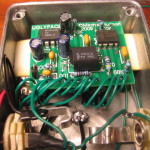 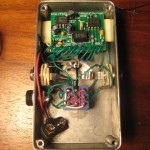 One of the Ugly Face’s that I built got a mention in the Fretboard Journal. No picture though. Which is too bad. They took a picture of a bunch of other more common name brand things. Really Tim Escobedo should have gotten a mention. The people writing these articles need to educate themselves on the history and lineage of the current era of Stompboxes.

I like the Tim Escobedo’s Ugly Face I’ve built about 7 now. This is a really fun pedal. Total Sonic Mayhem. Not for Jazz, though I’m hoping someone will take that as a challenge…

Something that is not really a problem, but has always bothered me is the volume. The Ugly Face is extremely loud. The output swings about 0 to 9V. Which leaves a small usable range on the volume knob.

Lately I have been adding a 68K resistor in series between the volume pot and the output from the circuit. My measurements seemed to suggest an 80K would be better but I had 68K on hand. The the thing is still way loud. But now at least volume pot seems to have a more usable range.

Here’s a simple mod that adds a blend pot to the Ugly Face.

Punch In the Face

This is Tim Escobedo‘s FET Driver.

This is another fine little Distortion by Tim Escobedo. I think this sounds pretty good. The sound can go from mildly distortion/overdrive to over the top almost metal. It can also get some splatty fuzz tones and a soft attack.

Another very original design by Tim Escobedo. This an octave up with a sitar like sound.